How I Taught Myself How To Play The Piano 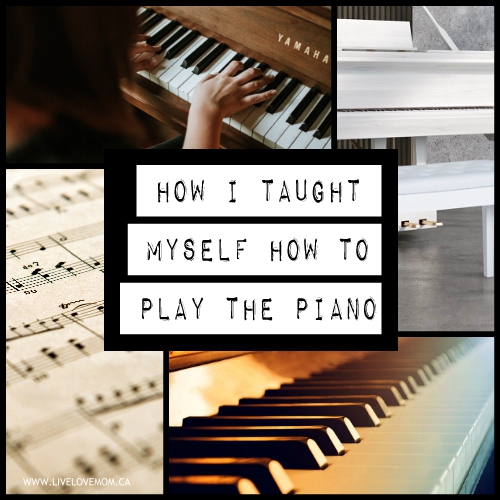 I saw my mother playing the piano and learning different songs that she heard from her favorite movies. We had a piano in our house growing up, and I always loved it. I enjoyed the sound it played and my mom was very passionate about it. She would play for what seemed like hours and kept practicing, and she got better and better. I still remember the melody of the main song she played, and I even recorded it on my tape recorder. When I played it back, she heard some of her mistakes and she pointed them out, but I didn't care. I heard my mother playing beautiful music and doing something she loved, so I didn't notice the mistakes. I saw my mom being happy and reproducing something beautiful.

I wanted to play a musical instrument since I was in elementary school. I could play the recorder well, I tried the flute but it didn't quite work out. The guitar required longer fingers, so contorting my hands to reach the necessary notes would cause me pain. The piano seemed to be peftect. One day, I sat down and I started playing the keys. I could listen to sounds that clashed and knew not to play those keys together.

I was in the school chorus, so I knew my scales and what they sounded like, and I had some knowledge on how to read sheet music. But I never really tried following sheet music because it would take me a while to figure out what it even means. So, I would play each note until I could hear the proper sound that played ''Do''. Then I would press the other keys to find Re as well as Mi and the other notes. Once I figured that out, I was able to play my scales and I practiced doing those in different tones. I would play them on the highest notes they could go, to the left end of the piano keys where it played very low. When I had mastered that, I started to teach myself how to play some songs.

I knew some nursery rhymes like Mary Had A Little Lamb, and I would play those keys until I got it right. I learned different variations of that song and added my own little twist to it. Now this was the first song I could properly play so I would show everyone who cared to watch and listen. I was very proud that I could finally play a song.

In the school chorus, we had to learn a few songs to play at the end-of-school concert. I would always be learning classic new songs, so I would use the lyrics and the notes I learned and try to reproduce it on the piano. I didn't try to learn anything complicated like the background music, just the notes that I would be singing. I would play the keys until one sounded right, then keep that going until I had the entire song done. I would learn by ear. No one could ever accuse me of being tone-deaf because I could hear the differences between the notes very well.

Eventually, I started playing around with playing more than one note at the same time. I came up with some notes to play together that I could use as some background music for something else. I remember one time, I was playing that song and my mother was in the kitchen doing the dishes. She listened to me play this song many times before, but this time she came out of the kitchen and came to join me. She told me that every time I play that song, there is a little tune that plays in her head. So she asked me to scoot over on the bench and I did, and she experimented with the keys until she found the right notes. She then started to play the tune. I loved it! I started to play the notes I was always playing, and she added in her little tune. Both sounded so perfect together. We looked at each other with grins on our faces. We had just created a song together!

I would eventually practice both tunes at the same time, which was challenging, but taught me some dexterity and flexibility in my hands and fingers. It also takes tremendous concentration to be able to do two things at once at the same exact time. I learned other tunes here and there, but to this day the first thing I play if I have access to a piano is the song that my mother and I made together.

I may not be as knowledgeable as professional piano players or those who took lessons, but I am proud that I was able to teach myself the basics without any help, and even create a song with my mother. Those are some of the best childhood memories that I have, is doing those little things with my mom. Art is something we shared a passion for, and we even drew together. It's something I'll never forget and I'll always be thankful for.

Did you teach yourself how to play an instrument? Comment below!